The July 7th event for our study site and several design storms have been simulated to demonstrate this potential.

The application of the HiPIMS model requires the following data sets:

To represent the storm sewer drainage losses, an infiltration loss is assigned to the roads. A value of 13.2 mm/hr was specified, with the losses from the roads placed in the adjacent inner rivers. This is approach is commonly used in hydraulic modelling, but Qian et al. (2020) extend HiPIMS using a novel numerical scheme to calculate flow dynamics in pipes, which could be utilised as future work.

Figure 1 shows the hourly rainfall for the July 7th 2016 event, approximately 140mm of rainfall was recorded in a 7-hour period (Wang et al. 2019). It should be noted that the estimation of the event total is difficult due to the highly localised nature of the storm. 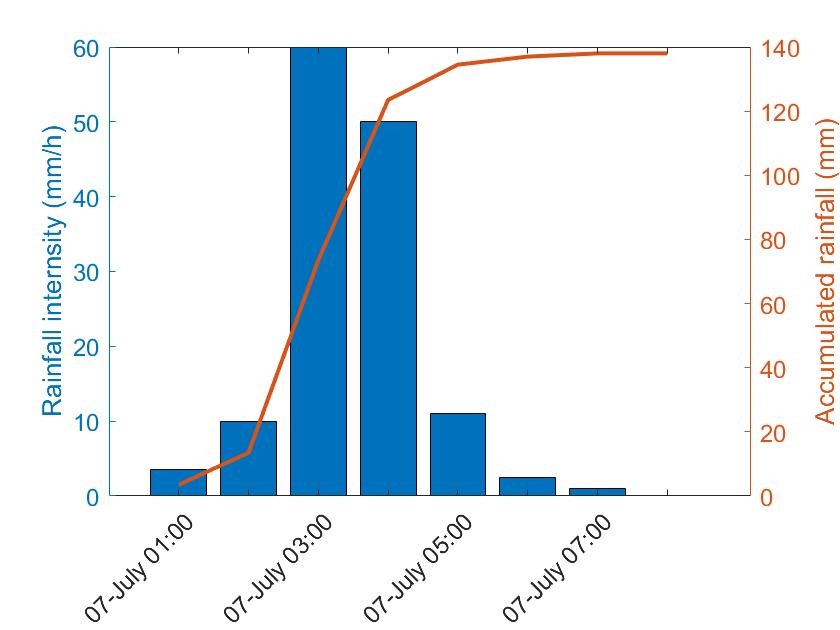 The maximum recorded inundation depths for the July 2016 storm event are shown in Figure 2. The inner rivers are visible as dark red lines and pockets of flooding are shown in other colours.

Comparisons have been made at selected points against media reports of flooding. The simulation results are generally consistent with the reports. The results should be interpreted with care due to the error and uncertainty of the adopted DEM and data from the media reports. However, the depths are available in the Outputs section of this website.

The model run time for this 7hr event was 6.5 hrs, which approaches the potential required for real-time forecasting. 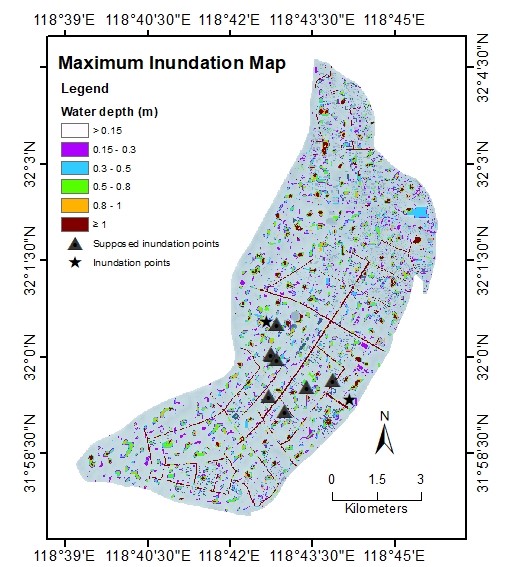 For each return period, 2 storms were selected from a 1000-year RAINSIM simulation (Figure 4)

Thus, we sample potential uncertainty in the duration and shape of rainfall forecasts.

The highest water depth was found for each pixel in the modelling domain. A depth of 0.15m does not have serious implications for traffic or pedestrians. Also, 0.15m broadly corresponds to curb height, above which damage to property may be expected. The percentage of the area of Shazou polder inundated is shown for the set of storms in Figure 5, with depths <0.15m excluded from the analysis. 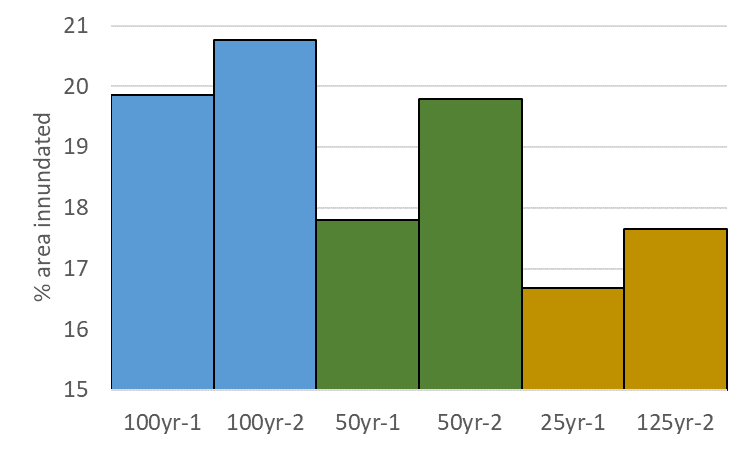 Figure 5. Inundated area, expressed as a percentage of the study site area, for 2 storms selected for three return periods. The labels refer to the rainfall return period and the storm number.

Sources of Uncertainty and Recommendations

The three most commonly considered sources of uncertainty in urban modelling are:

We do recognise that the DEM resolution should be improved to allow the micro-features that influence flow to be represented, for example through the collection of LiDAR data. Liang and Smith (2015), for a city in southern England, demonstrate how a 2m DEM was required to capture the network of canals and lakes, which reduced the flood extent in comparison to using coarser representations. This is a similar situation to Nanjing, given the presence of the inner rivers. The modelling of the potential sponge city measures will require high-resolution DEMs. Additionally, the study of Liang and Smith (2015) demonstrated the benefits of modern graphics processing units to accelerate large-scale high-resolution simulations.

Coarser grid resolutions typically exhibit a lower sensitivity to Manning's n (Liang and Smith, 2015). However, low sensitivity is not a justification for using coarse resolutions as the difference in the inundation extent in comparison to fine resolution grids greatly exceeds the influence any parameterisation might have.

The rainfall data were obtained from the Dongshan gauge. However, the storm was highly localised and a single point measurement is not sufficient to capture the spatial-temporal rainfall patterns. Capturing extreme rainfall remains a key challenge in urban flood modelling. The use of radar for the post-analysis of events and real-time flood forecasting offers one avenue that should be explored, but we acknowledge that this technology still has limitations. We verify our results using newspaper reports; the use of social media does offer an additional opportunity to verify modelling results (Smith et al, 2017).

Finally, it should be noted that inundation mapping for storms of a given duration may require frequent updating, given the rapid urban expansion encountered in many Chinese cities.

Beyond the scope of this project, the following items are suggested for future work