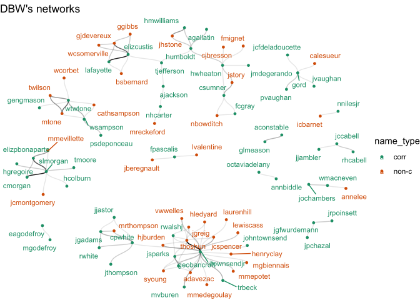 This ATNU pilot project has begun the process of mapping the transatlantic networks of one of Romanticism's most important nodes in the exchange of literary and scientific correspondence, David Bailie Warden (1772-1845). Warden is known as an Irish political asylum seeker who rose through the American diplomatic corps in Paris to become a respected scientific writer in his own right, authoring and collaborating in foundational statistical works on America, the burgeoning natural sciences, and slavery. This project presents another equally, if not more, important aspect of Warden’s historical importance; a transnational hub who connected with the most famous figures of scientific and literary progress.

Using a sample of material from a selective period (1817-1845), the pilot showcases a wealth of previously unseen archival material, offering a window on what a nineteenth century social network looks like. The dataset, drawn from one of our archives in Baltimore, Maryland USA, is also freely available for public and scholarly use and includes:

Our basic visualisations developed by RA Sharon Howard show the changing patterns of letters to Warden e.g. who wrote to Warden most often, senders who mention the most people, which figures are mentioned most often in letters, which organisations were mentioned most often. These basic visualisations demonstrate the overall structure of the network and help discover trends/topics/individuals to close read.

While the pilot was based on a single archive of letters, limited by date range (1817-1845), the wider project will be based on multiple archives of correspondence including a large proportion of letters translated from French, most of which have never been used in Anglophone scholarship. The wider project is interested in how social networks have enabled us to form and maintain community throughout times of vast change, to solidify social bonds across space and time, and to maintain groups' ability to weather extreme political turbulence.

This work has supported a UKRI research grant application which, if successful, will allow the team to extend the project to a greater number of datasets, compiling a fully-searchable and reusable ‘who’s who’ of transatlantic intellectual activity which will be available to other research projects and the public alike. It will also deliver a series of Engagement activities at international events and with project partners in the UK and Ireland, building towards wider international collaborations