What is 'Sarum Manuscript'? 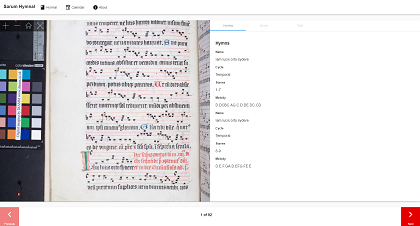 was the main source for strophic chants sung daily at the Divine Office under the English Use of Sarum or Salisbury. The Sarum Hymnal Project makes available, for the first time, the complete text of two primary sources from the reign of Henry VIII: one of the first printed editions (Rouen 1518), which is in Liverpool Hope University, Radcliffe B97; and one of the last manuscript copies, St John's College Oxford, MS 60, which was made by the musician and ex-monk William Forrest in the 1530s. Free-to-view publication will facilitate direct comparison of these two texts with each other, provide editors and performers with original source readings, and give new insights into pre-Reformation worship by way of notation, book layout, liturgical ordering, and performance practice.

The Sarum Hymnal Project has been enabled by the support of ATNU (for technical development) and the British Academy (for digitization and research costs), and by the collaboration of Liverpool Hope University and St John's College, Oxford. It originated as a standalone project intended to enhance public access to primary source materials, following the principles of the AHRC-funded Tudor Partbooks project. ATNU support enables us to broaden the conceptual scope of the project, which now serves as a proof-of-concept pilot for a wider digital investigation of the printed service books of the Use of Sarum, the most ambitious publishing enterprise for the English market in the sixteenth century.

The first iteration of the pilot presents the two texts in parallel, in the form of digital source images. The second phase of the project, already in hand, generates hypertext mark-up and critical notes: issues such as the misalignment of the first page in the 1518 printed edition, the different ordering of the two books, William Forrest's Humanistic Latin, notational variants (particularly in the use of liquescent notes), and paratextual elements.

The Sarum Hymnal project does not yet include sound files. This might change if consultations with end users, and the developing application for the 'Tudor Service Books' project, suggest a need for it.  Phase III of the Sarum Hymnal Project would enhance its 'animating' capability, namely a fully-functioning perpetual liturgical calendar which enables users to identify specific chants to be sung on specific dates in specific years: a very complex resource to create, but of potential value to historians as well as liturgiologists.