What is 'Mapping Translations'? 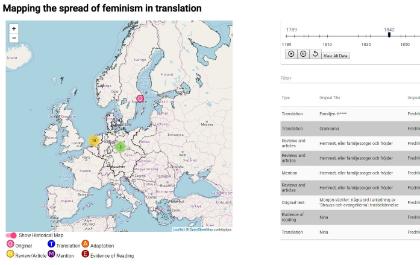 ‌This pilot visualises data from the New Approaches to Women’s Writing VRE, a collaborative project which collates research on the translation and reception of women writers across the globe. The ATNU pilot maps data from 1789 to 1929 for early feminist writers from seven European nations. The writers selected for the pilot are: Mary Wollstonecraft (Britain); Betje Wolff (Netherlands); Olympe de Gouges (France); Isabelle de Charrière (Switzerland); Fredrike Bremer (Sweden); Camilla Collett (Norway); Luise Otto-Peters (Germany). Although these writers represent only a snapshot of the data in the VRE, the pilot points to patterns of transnational dissemination and influence worthy of further exploration.

The pilot is the first step towards a more ambitious digital project which will investigate how feminist texts written before the so-called ‘First Wave’ circulated transnationally over time and how these patterns of translation and dissemination are related to feminist activism. This project will map the transnational reception data for a much wider range of women writers, in part by extending the project beyond Europe and in part by re-examining the criteria for inclusion as a ‘feminist’ writer. In the eighteenth and nineteenth centuries, many women writers who held ‘anti-feminist’ views nonetheless advocated improvements in female education and, as they were often more widely disseminated than their explicitly feminist contemporaries, it is likely that they shaped the development of feminist thought. The project aims to visualise this complex picture of the transnational progress of feminism, pinpointing hotspots and trajectories of networking and influence.

The pilot plots the reception data for the seven women writers on a European map. It has a full relational database to support advanced queries and store more metadata, particularly around the evidence sources. The data is categorised by reception type and includes: translations; adaptations; reviews and articles; evidence of reading; texts where demonstrable influence has been established. The map has a timeline which allows the user to ‘travel’ through time and view the developing reception of a given text or writer. The map is dynamic, changing with the date on the timeline. Superimposed on the modern map are vector images representing the changing national borders in Europe in the course of the period. This is important because the significance of particular ‘clusters’ of reception data may be illuminated by political and cultural connections between nations that are not readily apparent on a modern map. The data can be visualised either chronologically, by year, or synchronically, with all data points visible in the map at once.

As the constraints of the pilot required selective use of the VRE data, the reception patterns it represents are necessarily skewed and incomplete. The precision of the VRE data also varies, which in turn affects the accuracy of the pilot. For instance, in some cases, the VRE states the country in which a text was printed rather than the city, which makes it difficult to plot markers accurately on the map, especially as national borders were constantly shifting in the period. The larger project will require careful preparation to establish criteria for inclusion, categorise the data, and ensure appropriate levels of data accuracy.

Future iterations of the project will also aim to visualise connections between source texts and translations, as well as uncertainties in the dataset. For instance, it is not always possible to know where a translation was circulating or what the source text was because no extant copy exists or because it was never published. The potential of the digital map as a research tool would undoubtedly be enhanced if users could chart specific trajectories of influence, as well as noting potential uncertainties in the data represented.