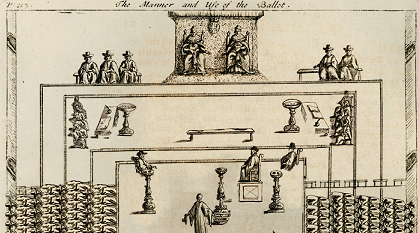 This pilot brings to life the image of a secret ballot depicted in James Harrington's pamphlet The Use and Manner of the Ballot. Harrington had come to fame with his work The Commonwealth of Oceana (1656), which was designed to bring peace in the aftermath of the English Civil War. The secret ballot was crucial to that model and its aim, but Harrington was concerned that it was difficult for his readers to understand. The ballot, he insisted, was 'difficult' to convey 'in discourse or writing', but 'facile in practice'. (James Harrington, The Use and Manner of the Ballot, London, 1658/9). By producing an annotated image of the ballot he hoped to make it easier for his audience to comprehend, thereby convincing them that it was a quick and efficient method of election. In animating the ballot following Harrington's instructions this pilot takes The Use and Manner of the Ballot even further in the direction of his aim.

The early modern ballot is a pilot for two wider projects. First, in practical terms, it offers an initial step towards thinking about the different innovative formats that might be used in a new digital edition of Harrington's works. Such an edition would move beyond providing a digital version of the paper copy and would instead present different aspects of the texts in visual, audio and interactive form. Secondly, Harrington was not alone among early modern political thinkers in seeking to engage his reader's imagination in order to convey complex political ideas effectively. The pilot thus provides a starting point for thinking about the role of genre, format and materiality in early modern political text.

The pilot was successful in bringing the secret ballot to life. Moreover the production process was itself a revealing experience. It showed the image to be meticulously detailed and the accompanying commentary careful and accurate. It was also striking that the commentary adopts something very like algorithmic form.

At the same time, producing and viewing the pilot has raised questions. On a practical level the ballot takes a long time to run through and it cannot be paused. Audiences seem to have been divided on the question of whether the animation makes the ballot more comprehensible or less. Perhaps more importantly, the original still image with commentary relied on the reader using her imagination to make sense of the ballot. It is, therefore, worth asking whether in making it easier for the reader to envisage the ballot something important is lost?