Microstratigraphic analysis of cave deposits –the issue of mixed faecal sources and movement within the cave sediments will be further addressed through integrating sediment micromorphology. This is a technique originally developed to investigate soil formation processes, which enables us to examine stratigraphy at a very high resolution (Kubiena, 1938). It has the added advantage of enabling us to view all components of deposits simultaneously, in their precise depositional context, providing a multi-proxy approach to deposit interpretation and stratigraphic integrity (Matthews et al., 1997). Individual depositional events, such as the discard of hearth fuel, leave laminations that may be less than 1mm thick. By examining such layers in situ under the microscope, we are able to resolve the fine layers, establish sequences of events (Matthews 2010, Shillito and Matthews, 2013) and to distinguish between undisturbed layers and those that have been bioturbated. The technique has been successfully applied to early occupation deposits in caves around the world. It has provided evidence for the earliest use of fire for example, through identification of microscopic ash layers (Berna et al., 2012) and the use of grasses as ‘bedding’ by Middle Stone Age humans in South Africa (Wadley et al., 2011). It has also been used to provide a stratigraphic control for radiocarbon dating of the earliest pottery in the world, 20,000 cal yr BP, at Xianrendong Cave, China (Wu et al., 2012). Whilst analysis of biomolecules will indicate variability in concentration throughout the sediment profile, micromorphology will reveal the physical processes by which these molecules are moving. It will enable us to distinguish visually whether or not human and animal faeces are co-mingled, and if movement of materials is occurring at the microscopic (<1mm) scale, as has been suggested in a pilot study by the PI, funded by a NERC LSMSF pilot grant (Fig. 2). 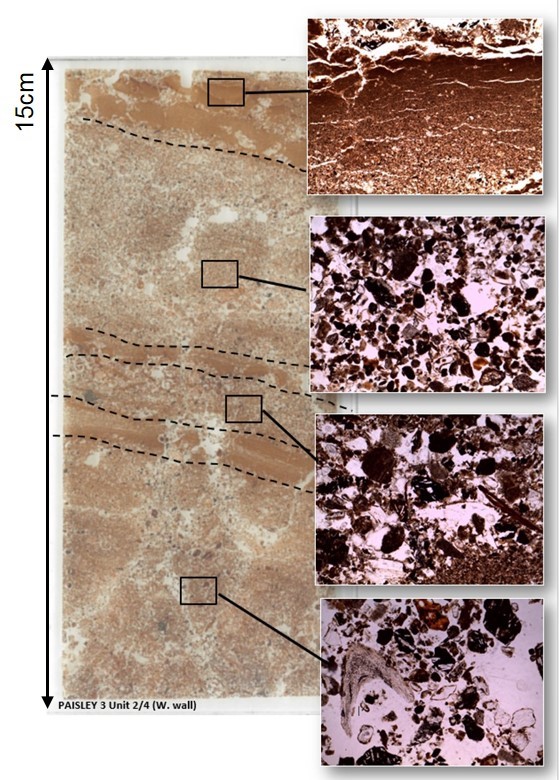