‌'The Orangery Urns' and 'Your Sweetest Empire is to Please'

Gibside, a National Trust property situated in the Derwent Valley on the outskirts of Gateshead, is a vast 18th Century parkland created by the music and arts-loving coal baron George Bowes and landscape designer, Stephen Switzer. This was an extravagant and ambitious landscaping project in its day, transforming the natural valley into straight and formal vistas combined with irregular planting and meandering paths. The scheme included the development of new garden buildings, a Palladian chapel, a bath house and stables, a Gothic banqueting house, and at the end of the Long Walk a famously tall ‘Column to Liberty’. In the 18th Century Gibside was one of the country’s most well-known and opulent of designed landscapes.

The artist’s brief for the Gibside commission focused on the dramatic and shocking story of the Countess of Strathmore, Mary Eleanor Bowes. Also known as the ‘Unhappy Countess’, Mary Eleanor Bowes was George and Mary Bowes’s only child and one of the richest heiresses of her day. She was highly educated and an enthusiastic plant collector. She was tricked into an abusive marriage to Captain Andrew Stoney who went on to plunder the magnificent landscape established by her father. In an age where scandal and scurrilous rumours were rife, Mary Eleanor Bowes’ life provided much material for the journals and scandalmongers of Georgian society.

Developed in collaboration with the National Trust, and to link with its 2018 ‘Women and Power’ national programme, a key aim of the commission was to make Mary Eleanor Bowes' dramatic story more visible to contemporary visitors to Gibside. For the MCAHE project, two new temporary outdoor installations were created in response to the Gibside brief: The Orangery Urns by Andrew Burton, and Your Sweetest Empire is to Please by Fiona Curran. 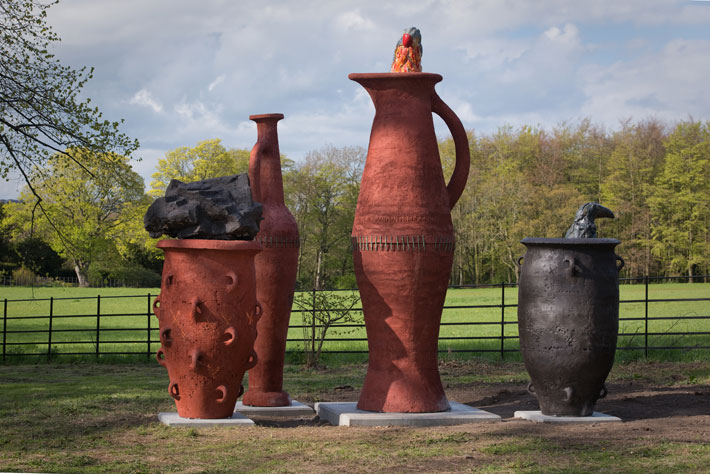 The Orangery Urns, sited within the walled garden and beneath Gibside’s famous avenue, took as its starting point a group of ornamental urns that once graced the balustrade of Mary Eleanor’s Orangery. During the period of Gibside’s decay in the mid-20th Century these were removed and re-sited at the Bowes-Lyons principal seat at Glamis Castle. Andrew’s work ‘returned’ the urns to Gibside, but by remaking them in a new form. His series of giant ceramic vessels were his response both to the story of Mary Eleanor and to the extraordinary sense of scale that is one of the features of Gibside. Some of these vessels were inscribed with texts taken from Mary Eleanor’s journals and those of her plant collector, William Patterson, while others contain sculptural elements that suggested episodes and characters from her life at Gibside. 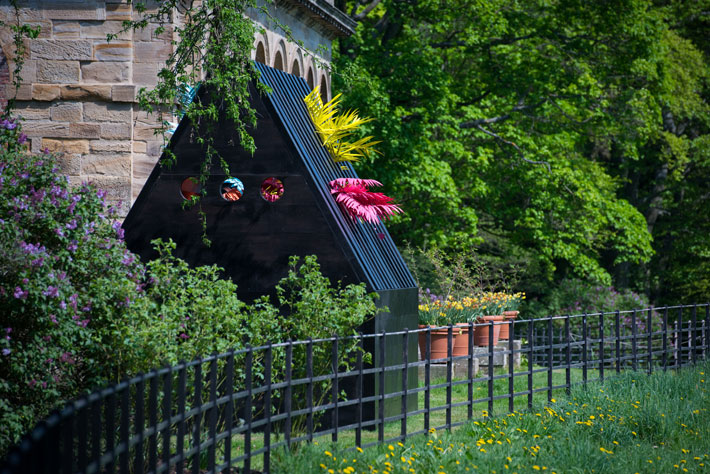 Fiona Curran’s commission for Gibside, Your Sweetest Empire is to Please reflected her ongoing interest in historical landscape, ownership and gender politics as well as drawing on Mary Eleanor Bowes’ enthusiasms for plant collecting. Fiona's work at Gibside centred on the creation of a new sculptural folly, situated next to the ruined Orangery, and based on the design of 18th Century seed carrying caskets, used by plant collectors to transport their finds. For images and to read more about the inspiration for the artwork visit Fiona’s commission blog, Undisciplined Women.

Both installations, 'The Orangery Urns' and 'Your Sweetest Empire is to Please', were on public display at Gibside from 12 May – 30 September 2018.

Andrew Burton is a visual artist and Professor of Fine Art at Newcastle University. His work often situates sculpture and installation in relation to landscape and architecture. His engagement with the narratives and histories of place emphasises the use of materials and processes that have a particular cultural significance. He works with materials as various as bamboo, clay and cow dung and often develops projects collaboratively, recently working alongside artisans and craftspeople in India and East Africa. Andrew's sculptures and installations are often conceived as temporary structures - once sculptures are resolved and exhibited they are broken up, with the component parts salvaged to form the building blocks for the next work.

Fiona Curran is an artist whose work explores the poetics and politics of landscape space via the making of objects for exhibition, writing and site-related public commissions. She holds a PhD from the Slade School of Fine Art and is a Senior Tutor at the Royal College of Art, London. Fiona’s work has been exhibited nationally and internationally. Her public commissions include works for Kielder Art & Architecture, Northumberland; Art Across the City, Swansea; The Royal London Hospital; Danson House, Bexleyheath Park, Kent and Tatton Park, Cheshire for which she was awarded a RIBA small projects award.