What is Digital Editing

Digital editing or, to be precise, Scholarly Digital Editing, shares many of the same goals as traditional print-based Scholarly Editing. Patrick Sahle, for example, proposes the following definition:

A scholarly edition is the critical representation of historic documents.

Sahle’s definition is an excellent starting point, condensing the defining features of a scholarly edition into a few words. A scholarly edition should be critical – that is, it should engage with the text in a critical and reflective way; it should be a representation – it should include the object of study, otherwise it could not be called an edition; and it should focus on the historic document, be it a text, poem, play, or even a tapestry – whatever form the original object takes, it should be the focus of an edition.

A digitised edition is not a digital edition.

Scholarly digital editing, therefore, shares the same objectives of traditional scholarly editing, but is informed by a digital paradigm – in other words, a good scholarly digital edition (SDE) should be born digital and not merely reproduce on the screen what readers would see on a page. The digital paradigm that informs a SDE means that the space constraints of a print-based edition can be disregarded. Textual notes and editorial commentary can be expanded and no longer need be relegated to the bottom of a page. Sections of text can be linked together and, when relevant, multimedia content can be added. However, the digital paradigm that informs a SDE goes well beyond issues of layout and space – the fundamental concepts of a SDE are intrinsically different from those of a print-based scholarly edition. As Elena Pierazzo argues,

editions as we know them from print culture are substantially different from the ones we find in the digital medium. They may perhaps present the same material in the same way as their printed counterpart […] but they are intrinsically different with respect to traditional models (p. 463)

That intrinsic difference, Pierazzo goes on to argue, is a fundamental characteristic of a SDE, a process known as encoding.

The first tag, <author> tells the computer that the text that follows is the name of the author; the second tag, </author> limits the name of the author to what preceded it. Textual encoding, therefore, is the process by which an editor makes plain text readable to a computer. An encoded text allows the computer to perform tasks that could only be done by humans such as, for example, identifying all the authors discussed in Gerard Langbaine’s An Account of the English dramatick poets (1691). 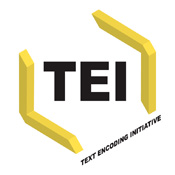 ‌The de facto standard for textual encoding is established by the Text Encoding Initiative (TEI) Consortium. The consortium has been developing a series of guidelines for textual encoding since 1994. The TEI guidelines are widely supported and widely used by Scholarly Digital Editions everywhere. TEI is based on XML (eXtensible Markup Language) and is in constant development. Its adoption as a standard means that, in theory, different texts encoded by different people can work together; and because it is based on XML which, by definition, is an extensible computer language, it means that it can be adapted to the specific needs of editors. James Cummings, writing about the history, development, advantages and limitations of the TEI writes that 'The TEI provides a substantial framework upon which scholars and editors can undertake the study of literature through digital means. It is inevitable that more digital editions will continue to be produced, and that the TEI has a role in assisting these to be accessible and interoperable'.

The use of textual encoding is fundamental to scholarly digital editing because the encoding itself is an editorial act. As Pierazzo notes, 'while the source [XML] contains the ingredients to produce the edition, it can in many circumstances be considered an edition by itself: for a TEI expert, for instance, an XML source file will be even more eloquent than the output' (p. 473-474). This is because the source code will always contain more information that what can be seen in the display text. TEI allows for, for example, the encoding of multiple witnesses simultaneously. The editors can then decide which of the variants to show the reader in the display text, or even allow the reader to choose for him or herself. Furthermore, two editors with different interests, given the same text, will encode it differently. In many ways, the textual encoding is the defining editorial process in a SDE.

Advantages and disadvantages of a Scholarly Digital Edition

A properly encoded text offers an astonishing amount of possibilities that are unthinkable for a print-based edition. For example, the reader can be offered a choice to see different levels of edited text, from a reading text (corrected, normalised spelling, etc.) to a diplomatic text (transcribed as accurately as possible from the source document); the reader can be given an option to see all the variants of a specific passage, or even allowed to construct his or her own version of the text. Depending on the type of document being edited, other possibilities open. The Shelley-Godwin Archive, for example, lets users shift between Mary Shelley’s original drafts of Frankenstein and Percy Shelley’s comments and corrections.

Beyond the screen, a SDE offers even more and more interesting possibilities for editors and researchers. A properly encoded text can be questioned in ways that could never be possible either by human labour or by working with a plain text file. Given an early modern play, with an adequately encoded text, a script (i.e., a short computer program) could calculate exactly the absolute minimum number of actors needed to perform it onstage, and which characters could be doubled by the same actor without loss – and then do the same for thousands of other plays in a nanosecond.

Despite all its advantages, a SDE is not a perfect format and, arguably, may even represent a step-back from traditional print-based editions in some respects. Scrolling to read, rather than page-turning, demands more from the reader, even if it offers some advantages like full-text search. Peter Shillingsburg warns against information overload: ‘The comprehensiveness of the electronic archive threatens to create a salt, estranging sea of information’ (p. 165).  Perhaps more dramatically, a digital edition lacks the physicality that a facsimile print-based edition can preserve. The information about dimensions can be recorded, of course, but the impact of holding a First Folio and whatever critical considerations can be derived from it, cannot.

At ATNU we are aware of these and other drawbacks of SDEs, but we are also excited by the possibilities offered by digital texts – in fact, we want to take text beyond what is already possible.

Cummings, James. 'The Text Encoding Initiative and the Study of Literature', in A Companion to Digital Literary Studies, Ed. by Susan Schreibman and Ray Siemens, (Oxford: Blackwell, 2008), pp. 451-476.