By definition, many musical and cultural activities have a strongly public dimension, and at ICMuS this also goes for our musical research, whose impact often extends well beyond the immediate academic community.

Since the late 1990s we have made cultural and social well-being an explicit part of our agenda, and this is reflected not only the topics of our research, but also in the way we conduct it and in the range of our collaborators – not only other academic institutions but also with individuals, groups and organisations locally, nationally and internationally. Moreover, we aspire not only to share the fruits of our own research with others, but also to learn from their knowledge and experience. Hence, benefit, agency, and impact flow both ways. 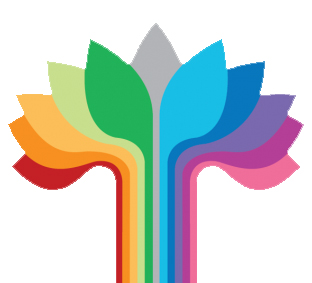 The ¡Vamos! Festival, founded in 2006 by Ian Biddle (ICMuS), Nik Barrera and Vanessa Knights, is an annual festival of music, art, film, theatre, dance, literature, cuisine, fashion, sport and education. The festival brings together artists and practitioners from all over the world to celebrate Spanish and Portuguese speaking global cultures. From its inception, the festival has showcased a diverse range of cultural materials and practices, brought a new understanding of these global cultures to Newcastle-based audiences, and facilitated the establishment and consolidation of a range of local and global partnerships. Partners include Newcastle University, The Sage Gateshead, Northumbria University, Newcastle, Gateshead and North Tyneside Councils, The Spanish Government, The Mexican Government (see here for more) and was funded by Newcastle University, Arts Council England, The Instituto Camões, The Spanish Embassy to the UK and others.

Ian Biddle was active in ¡Vamos! up to 2011 and had had a key role in the first three festivals, drawing on his research expertise in Hispanic and Lusophone musical cultures, and contributing to the programming and organisation.

To date, the festival has achieved total audience figures exceeding 45,000.

For a full list of previous festival editions, see here. 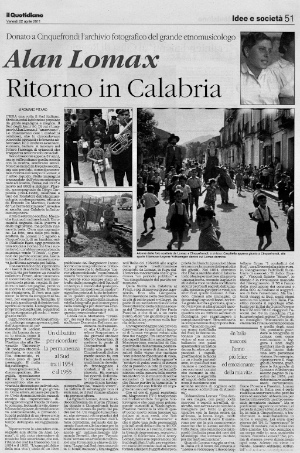 Goffredo Plastino, Reader in Ethnomusicology at ICMuS, and curator of the Italian Collection for New York based Association for Cultural Equity (ACE), has been central in the repatriation of materials made by ethnomusicologist Alan Lomax (1915–2002) in Naples and in Cinquefrondi (Calabria). This collection includes field recordings and related materials produced by Lomax in Italy in 1954–5. For further details see below; http://www.culturalequity.org/ace/ce_ace_newsprograms.php and http://archive-org.com/page/3177277/2013-11-18/http://www.culturalequity.org/news/?p=21. More repatriations in Italy are currently being planned by Plastino in collaboration with ACE, and will take place in 2014.

This repatriation is an aspect of the impact of Goffedo Plastino's work as a leading Lomax scholar. His edition of texts and photographs from Lomax's Italian fieldwork (excerpts from essays, field notes, letters and scripts for BBC radio programmes) is published as the book L’anno più felice della mia vita: Un viaggio in Italia 1954–1955 (Milan: Il Saggiatore, 2008), which also includes a detailed essay by Plastino.

Lomax and the Association for Cultural Equity (ACE)

Alan Lomax was a pioneer in the repatriation of cultural documentation. He deposited copies of his large collections in national archives at a time when tape and disc media made it difficult and expensive to do so... ACE joins with libraries and cultural organisations to bring home the compelling music, photographs, film, video, interviews, and research from the Alan Lomax Archive... Collaborating with [their] local partners, [ACE] arragne[s] for the families of the artists to take part in a formal repatriation ceremony and be given copies of 'their' media. ACE encourage[s] full use of these materials, including their integration into school curricula, museum collections, and radio programming, and offers resources and counsel to help implement such cultural feedback strategies http://www.culturalequity.org/ace/ce_ace_dissemprogram.php.

Music and HIV/AIDS: raising consciousness and changing attitudes among patients, professionals and public

HIV/AIDS has been closely linked to artistic and musical expression on a continuum from popular to ‘high’ culture since as long ago as 1982; and this has been the subject of an extensive research project by Paul Attinello. Details of the research itself can be found on the Research Projects section of this website. Additionally, this work has had considerable impact on the HIV/AIDS community and medical community in Newcastle as well as in the world at large.

For around ten years, Attinello has worked closely with clinical psychologists, doctors and medical personnel at what is now Ward 19 at the Royal Victoria Infirmary, Newcastle. His work links personal experience with artistic creation, professional conferences, medical training, counselling, public events and patient experience. This has involved more than 200 meetings with total audiences of more than 5,000 and events that have changed perceptions and attitudes.

Some examples of events into which Attinello’s research has fed include Newcastle World AIDS Day; presentations at venues such as The Sage Gateshead and Newcastle Centre for Life; his chairing of a public post-show discussion at Northern Stage theatre’s production of Angels in America (which also included facilitating the involvement of actors and an HIV/AIDs client group.

A focal point has been the many connections with the Patient Participation Team, created at Newcastle General Hospital in 2003. Attinello’s role as General Manager (2003–6) and subsequently Training Manager (2009–present) of that group has allowed him to lead or participate in many public events, medical, and academic presentations.

Members of the medical community closely involved with HIV/AIDS care have been deeply struck and inspired by presentations of artworks and musical works related to AIDS. Groups with whom Attinello has worked include medical students (approximately 2,000–2,500 during this period) and psychology, nursing, and GP practitioners (200 psychology students, 60+ nurses, 100 GPs, associated with various NHS centres across the Northeast).

Attinello’s articulation of a clear history of the illness and the populations and individuals who have had it, together with detailed explanations of their emotional and social journeys, and remembrances of those who have died – all communicated through narratives in his research – has led to a marked raising of consciousness and a sharing of insights among attendees. Testimonials and commentaries demonstrate that medics learn a great deal about the personal and social histories of the crisis, which even the most skilled of personnel have rarely learned elsewhere.

Southern African Cultural Leadership (SACL) is a governance and capacity building project that highlights the role of culture in building bridges between South Africa and Zimbabwe as well as an important instrument for sustainable development across South Africa. This project is the initiative of ICMuS Senior Lecturer Dr Nanette De Jong, and emerges out of her ethnomusicological researches into African and Afro-Caribbean musical cultures. Her fieldwork on African ritual established a social infrastructure that facilitated this major intervention. Through partnerships with local cultural sectors and NGOs in Southern Africa, SACL is changing people’s lives both economically and in terms of their well being. A distinctive element of SACL is Dr De Jong’s collaboration with community members in the research process itself, by way of co-authored articles. ICMuS undergraduates have also participated in cultural exchanges with SACL.

ICMuS has well established connections with South Asian communities in the North East of England, and longstanding associations with arts organisations responsible for promoting South Asian musics and related arts practices. These include Kalapremi, GemArts and Pakistan Cultural Society, with whom we have co-promoted performances and workshops.

More recently, these organisations, along with Saarang – Arts and Cultures and The Sage Gateshead, have worked in partnership with us on the AHRC-funded ‘Musics of South Asia’ (Principal Investigator, David Clarke) which scopes out the present picture of South Asian musics in the region, as well as future ethnographic possibilities. This project provides a good example of how our research concerns and external engagements go hand in hand.

‘Indriya’ is another collaborative network, involving University staff, students inside and outside the University, and individual community members. It has promoted musical events bringing together all these parties – most notably a three-day workshop with international renowned khyāl vocalists Rajan and Sajan Misra.

ICMuS also promotes the work of Hindustani classical musicians Vijay Rajput (vocal) and Shahbaz Hussain (tabla) – performers on the national and international stage who teach ICMuS students, and help provide a bridge to wider communities and networks beyond the University. They are also research collaborators, acting as ethnographic respondents, as well as helping us produce outputs such as CDs (see here) and a projected guidebook on rāgas.

This project also draws on the expertise of staff from Fine Art and other parts of the university.

Funded by the Arts and Humanities Research Council, Northumbrian Exchanges responds to needs identified by various partners in rural Northumberland to better understand how rural communities are stimulating economic development through cultural activity. Newcastle University and a range of partners are exploring together how, in the current economic climate, capacity can be built within rural communities to sustain activity within the fields of visual art and music which are particularly vulnerable. The project seeks to develop creative engagement with rural communities through arts and music; to catalyse networks with local arts organizations; to generate opportunities for creative practitioners; and to enhance digital capabilities.