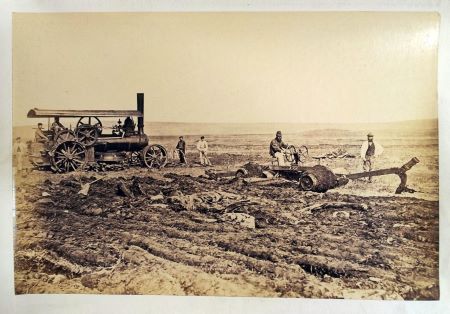 In 1868, planning began on the northern estates of the dukes of Sutherland for one of the largest land reclamation schemes in nineteenth century Britain. Underpinned by Victorian confidence in the wonder innovation of the age – steam power – the 3rd Duke of Sutherland invested heavily in steam ploughing sets, surveyors, labourers and buildings over fifteen years, in an (ultimately failed) attempt to create productive arable land and farms.

The Sutherland reclamations were the largest such scheme in nineteenth century Britain and attracted global attention.  Steam powered agriculture was taking off globally from the 1850s, and this scheme is significant in the imperial world, economically, politically and culturally.

They also represent an exercise of one of the greatest aristocratic fortunes of the age: the Sutherlands were among the richest of Britain’s patrician landowners in this period and the reclamations give us an insight into the economic and financial mechanics of how that fortune operated and why, and ties it into narrative of the ‘decline and fall’ of the family and their class.

Lastly, the reclamations became highly politicised in the early 1880s via the Highland Land War and land reform campaigns and this project will draw out those links to highlight how land reclamation fed into land reform and anti-landlordism.  This project will produce an edited academic version of the relevant archives, to be published in 2021.

Sponsors: The Carnegie Trust for the Universities of Scotland; AHRC

A. Tindley & A. Wodehouse, ‘The role of social networks in agricultural innovation: the Sutherland reclamations and the Fowler steam plough, c.1855-c.1885’, co-authored with Andrew Wodehouse, Rural History, 25:2 (2014).