Work on the The House of the Cryptoporticus 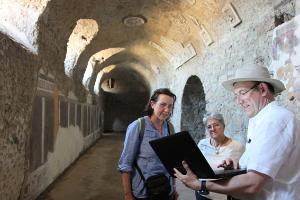 Essential to the Expanded Interiors Project is the study of two interiors, one in Pompeii and one in Herculaneum. Today we are working on the interior of the magnificent The House of the Cryptoporticus (Casa del Criptoportico), and have the special privilege of spending time with the Dott. ssa Patrizia Tabone, who was the Archaeologist responsible for Regio I in the Great Pompeii Project. Patrizia therefore knows the house very well indeed, and it is a great pleasure for all of us to discuss some of the challenges of interpreting it with her.

We talk as laser scanning of the building progresses. The sight is somewhat surreal, as a series of metal spheres now stand at strategic points on the floor of the crypotoporticus, giving the impression of aliens invading the shadedpassageways.  Yet, for me it is also a comforting sight, because the spheres provide the vital control that allow us to reconcile the multiple scans that Alex Turner, our outstanding geomatician, and I are producing – allowing us to create a full-size three-dimensional colour digital model of the space. As Alex and I have learnt from our earlier work together under the Lateran Basilica in Rome, no spheres means a lot more post-processing work – so the brief encroachment of these aliens is a welcome sight.

The Trojan War frieze is just a part of the whole visual feast, but it is a particularly interesting one. As our very own Dr Thea Ravasi observed in her preliminary notes on the arrangement, the placement of these painted panels within the wider decorative programme is notable, they are high up (3 m off the floor) and irregularly placed.  Thea is particularly interested in the relationship between windows and lighting more generally in the crypotoporticus and the location of the panels.  What might this configuration suggest about the experience of the ancient viewer?  Thea and I are particularly fascinated too by the challenge our colleagues here have confronted in restoring the complex schema, given the extensive damage to this part of the site resulting from a bombing in the Second World War.  Spinazzola’s magnificent reconstruction views of the wall plaster, published in 1953, are compelling – but therein lies the challenge.  It is very difficult to determine what he was able to reconstruct with certainty, what with high probability and what with varying degrees of conjecture.

For me, there is also another reason for finding the Trojan War theme here fascinating.  Of course, tales of the Trojan War were ancient even when the House of the Cryptoporticus was built, but the most extensive surviving accounts of the adventures of Aeneas and his followers after the fall of Troy date from the Augustan period. The life of the story, up to and including the moment when it was co-opted and adapted to serve the new world order of Rome’s first emperor are elegantly explored in Andrew Erskine’s Troy between Greece and Rome.*  Where might the decorative scheme we see in this fine Pompeian house fit into this longer narrative?   The paintings themselves are commonly dated to the decade when Augustus first rises to prominence, the years before his world changing victory at Actium.  And how should what we now know as the House of the Cryptoporticus be understood as a structure, with its architectural peculiarities, and its origin as part of a still bigger complex?  Plenty of exciting questions await.