The dismantling of the Garrison Church’s carillon in Potsdam, Germany 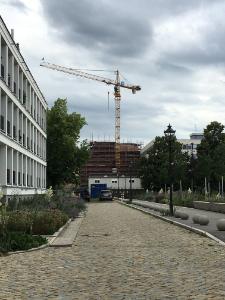 For more than two decades there has been an ongoing public debate over the reconstruction of the Court and Garrison Church in Potsdam, Germany. Meanwhile, the steeple is being built, while – according to current plans – the nave is not supposed to be reconstructed in its original form.

The Garrison Church was a Protestant Baroque church, used as a parish church by the Prussian royal family until 1918. On March 21st 1933 the National Socialists staged the so-called “Day of Potsdam”: Paul Hindenburg, the German president, “passed” the power to Adolf Hitler. Twelve years later, the church’s nave and bell tower were destroyed by fire during an air raid in the night from April 14 to April 15, 1945. Only the walls remained. In 1950, a chapel was built within the walls of the bell tower. In 1968, the GDR demolished the remaining walls, and three year later in 1971, a Computing Center was built. It was decorated with the mosaic by artist Fritz Eisel. Its title was “Man Conquers the Cosmos".

German history and memory is condensed at this place, and questions about the historical self-understanding of contemporary German society, about belonging and identity, are constantly re-negotiated. The controversy about the reconstruction revolves around the role of Prussianism and Prussian militarism for Modern German History, about the relationship between the Hohenzollern monarchy and the National Socialists, and about the location of the GDR and the role of communism for the history of the 20th century. The debate also concerns the interpretation and understanding of the re-unification process of East and West Germany after 1989.

Part of this public debate is an argument about the problematic history of the Garrisson church’s carillon, the “Potsdamer Glockenspiel”, which was destroyed in the Second World War and reconstructed in West-Germany by an interest group for military history and heritage of the West German military (“Traditionsgemeinschaft der Bundeswehr”) in the 1980s and given to the city of Potsdam shortly after the Wall came down. en/counter/points Principal Investigator Achim Saupe moderated a panel discussion between proponents and opponents of the dismantling of the carillon. The discussion followed a lecture by Prof. Oswalt (University of Kassel) in which Oswalt raised awareness for the national, revanchist and extreme right-wing backgrounds of the initiators and donators of the “Potsdamer Glockenspiel”.